Salvation (21 Days of Prayer for Sons)

…that if you confess with your mouth Jesus as Lord, and believe in your hear that God raised Him from the dead, you will be saved. 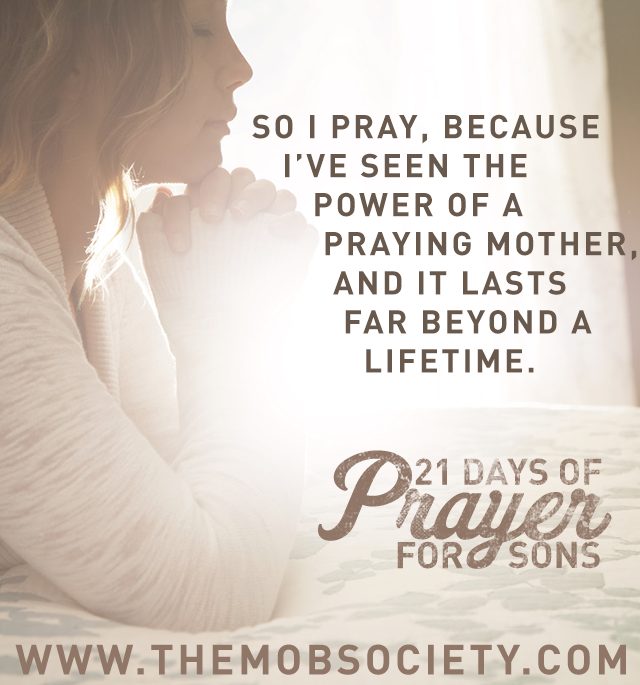 I prayed for a lot of things as a child. One of the most important was my grandpa. Raised in a pastor’s home, he decided at a young age that he wanted nothing to do with his parents’ faith. His dad died before I was born, his mom when I was very young, but I heard stories about them—and about their prayers. They were examples of ‘pray without ceasing,’ praying for their children and grandchildren and generations not yet born. Others picked up the torch when they were gone—my grandma, my parents, me—but our prayers seemed to hit the ceiling and bounce back with no results.

Years later, I was married and had my first son when my grandpa learned he needed heart surgery. He went to church with my grandma and my parents the Sunday before his surgery. I sat in our church, hours away, and told God, “The greatest thing would be for Mom to call and say, ‘Guess what?’’

After church that morning, my phone rang. Through tears, my mom said, “Amanda, I just had to call and tell you—guess what?” Tears streamed down my face. I already knew. All those prayers were finally answered…my grandpa had accepted Christ.

My grandpa’s salvation was one of the greatest moments of my life. It’s been more than ten years. He’s still serving God, and I still tear up when I tell that story. I learned so much about faithfulness and persistence in prayer. But I learned something else: a mother’s prayers matter.

My grandpa wasn’t the only one who needed Jesus. When his parents died, not a single one of their three boys was saved. Over the course of more than forty years, all three of the brothers accepted Christ. Then their children got saved. Then the grandchildren and great-grandchildren, many of whom were not even born when my great-grandparents were praying. The desperate prayers of a momma were answered.

My two boys are growing up much too quickly. I want to freeze time, keep them this age just a little longer, but I can’t. My husband and I teach them the Bible. We teach them to follow God’s Word and do what’s right. We set the best example we can. But the scariest part of parenting is how little control we actually have over their lives and their decisions. Ultimately, they have to decide to follow God for themselves. In a world that slips further from God every day, that’s scary—and the time is coming, all too soon, when they will face it on their own, as adults.

I have to fight this battle in prayer. I can’t protect them from everything. I’m not able to make their decisions for them. I won’t be there to shield them from every temptation. But I can cover them in prayer and put them in God’s hands. His hands are so much bigger than mine. He can do what I can’t. So I pray, because I’ve seen the power of a praying mother, and it lasts far beyond a lifetime.

Have you made it a habit to pray for the salvation of your son?

How has this study changed the way you pray for him so far?

Throughout the day, pray the ten scripture prayers found at the end of the Salvation chapter in Praying for Boys! Amanda Holland is a pastor’s wife, mom to two boys and a Yorkie, writer, and dental hygienist. She lives in Texas with her family and enjoys cooking, horseback riding, running, and getting lost in a good book. She blogs at Grace In Our Moments and is a contributor to Sleuths and Suspects. Her writing has appeared on numerous websites, including Inspired to Action, Million Praying Women, and The MOB Society. Her fiction has appeared in Splickety Love and Splickety Prime magazines.

21 Days of Prayer for Sons (join us for the next challenge!)