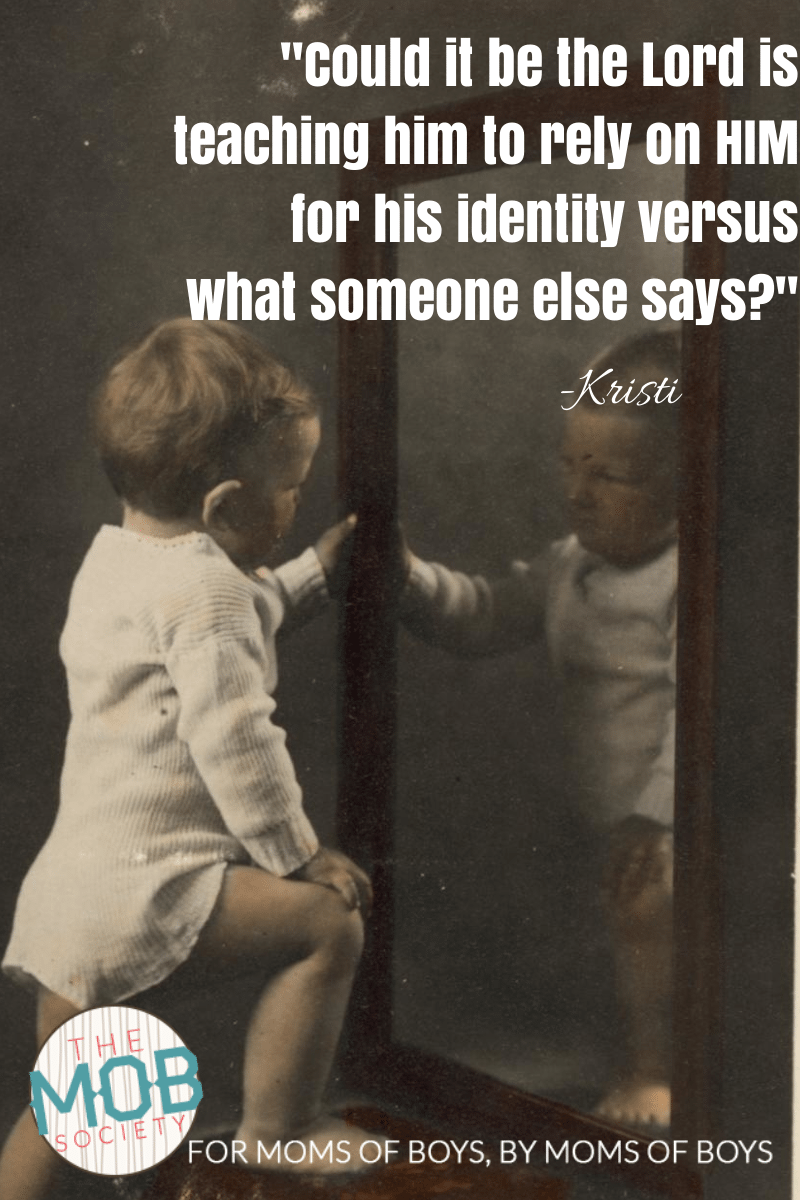 -Could it be the Lord is teaching himto

I recently realized my son and were both struggling with external perceptions and opinions of who we were and allowing our identities to be shaped by the words of others. I had spent months encouraging, affirming, and reminding my seven year old who he was in Christ, and how special, talented, loved, and respected he was, but even in the midst of those affirmations, I missed the most important part–what God says about us. I had focused instead on the identities we take on based on the words and opinions of those around us.

I had been struggling with the same challenges as all boy moms–sitting still in class, racing out the door to the playground, and excitedly responding too soon to questions about bugs, sharks, and animal life. Without even realizing it, a gnawing fear and insecurity about one person’s opinion and beliefs about my son (and consequently me and my parenting abilities) began to dominate my thoughts and prayer life. While at a stop light, I would look at the clock, and pray my son would just sit still. After a bad day, I’d cringe as he’d hop in the car.  An identity based on what he “wasn’t” consumed my day-to-day prayers.

Whack. Between the eyes.

“Could it be that the Lord is teaching him to rely on Him for his identity, versus what someone else says?”

A reminder this week from a wise woman, that one person’s opinion can’t shape who we are. Only One person’s truth about who are can build our identity. Words infused with grace and compassion came and reminded me God had created my son with great purpose and that nothing he was doing was terrible. He was all boy and didn’t need to run wild, but his good grades, friends, and funny personality were gifts, pointing to the identity God was building in him. His identity in Christ was based on what the Word said, not the opinions of others.

What one person says/thinks about my son should not affirm my parenting, abilities to be a mom, or shape his identity. What God says about my son, my parenting, and our identities as His children, is what matters. He has created my children in His image, for our family. He chose my husband and I to parent them, specifically placing them in our family, with us as their stewards. Our children are not placed in our homes by mistake. God knows you are perfectly suited for who has given you.

Today, my son hops out of the car and walk-runs to the school’s front door with a dozen other kids. But, instead of gripping the steering wheel in fear that he will have another bad day, I begin praying, entrusting him to the One who gave him to me. I claim His promises, resting in Him, as tears of release slip down my cheeks.

Prayer for the Day

Lord, I need your help to not only entrust my son’s life to You, but to trust You. You know what is best for him. I know nothing he goes through or experiences is without being sifted through Your hands first. You have great plans for him. Father, I pray for wisdom, discernment, for protection around our minds and hearts, that You would shape our identities, not the words of others.  Father, help us to be transformed by this renewing of our minds, clinging to Your promises and not the words of others. Amen.

The Truth Principle, Praying Circles Around Your Children, Praying for Boys.

Becoming More Flexible (hope for the messiness of motherhood)

Shake it Off, Girl (#BitsOfBrooke)

Rooting My Son in God’s Love