Dear Sons: Why I Want You to Be Like Ron Swanson

Dear Sons,
Your father and I watched all six seasons of Parks and Rec over the past three months, and while Leslie Knope makes the show, Ron Swanson is its backbone. 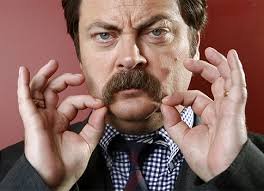 And boys? I like Ron. I like him, the same way I like your father because they’re not afraid to be men who “wear moustaches, who hammer nails, who smell wood and capture a household bug then set it free” (as Ron, or actor Nick Offerman describes on How to Grow a Moustache.) Who “tolerate crying babies, move out of their parents’ house, gain the trust of a dog, sweat, send a regular, hand-written letter, and eat a raw onion.”

A true man walks in the footsteps of One who knew his identity as the son of God yet did not take advantage of it; rather, he took the nature of a servant.

Now, Ron Swanson is not perfect by any means. I don’t recommend his habit of marrying psychotic women named Tammy. Neither do I recommend consuming copious amounts of meat or hard liquor, but the beautiful thing about Ron is: he is what you see. He doesn’t lie to you, he doesn’t cheat people, he has integrity.

Integrity is the kind of stuff that makes up men. It’s the deep-rooted assurance that you can trust this person, that he will have your back, that he is as good as his word.

Ron says it as it is, and your father does too. He will not beat around the bush because he cares too much about the truth.

Ron also stays off the grid because he doesn’t like attention; he runs from it, and finds solace in the woods where he carves canoes from trees and hunts for food and chops wood like your Daddy.


Your job as Christians, boys, is not to rise up and fight but rather to submit to Christ, who is your leader. To ask him to show you what it means to be a man, and then, to LIVE IT. To tune your voice to God’s, and turn neither to the left nor the right.

The greatest sign of weakness is a person who caters to popularity. Dare to be unpopular, sons. Dare to go off the grid. Don’t do anything for attention, but rather, spend time with Ron in the woods, in the silence, listening to the heartbeat of a heavenly father who grieves for his sons and daughters. Who longs for them to come home.

In closing, here is a story about the Titanic, sons, which I must share with you.

And the manliest of those men that night was Rev. John Harper of Glasgow, Scotland. He cried out, “Let the women, children and unsaved into the lifeboats.” Then he kissed his only daughter, Nana, goodbye and  placed her in the hands of one of the ship’s officers aboard a lifeboat.

Soon, sons, he found himself in water, and this is what an eye-witness, author Ned Ryun, describes as happening next:

Concerned not with his life, but for the dying around him, Harper with his last breaths swam to the dying souls and cried out for them to be saved–“Believe on the Lord Jesus Christ and thou shalt be saved.”
As his strength began to ebb, Harper called out to a man clinging onto a piece of timber, “Are you saved?”
“No,” was the reply.
A few moments later, Harper and the man came into contact again. “Are you saved yet?”
“No,” was again the reply.
“Believe on the Lord Jesus Christ, and thou shalt be saved,” Harper cried out one last time and with that, slipped beneath the waves. The young man clinging to the board was rescued and was later to testify that he had indeed been saved that night, not only by a rescuing ship, but by the words of John Harper.

Sons, the only thing that matters in this life is that we help lead people to the next. That we not be concerned with our own lives, but for the dying around us.

May you be humble leaders who aren’t afraid of scorn or ridicule, who fear no one except the One who breathed life into you. And may you die to yourselves so that in turn, others might be saved.

Getting Real With God for His Sake

Becoming More Flexible (hope for the messiness of motherhood)