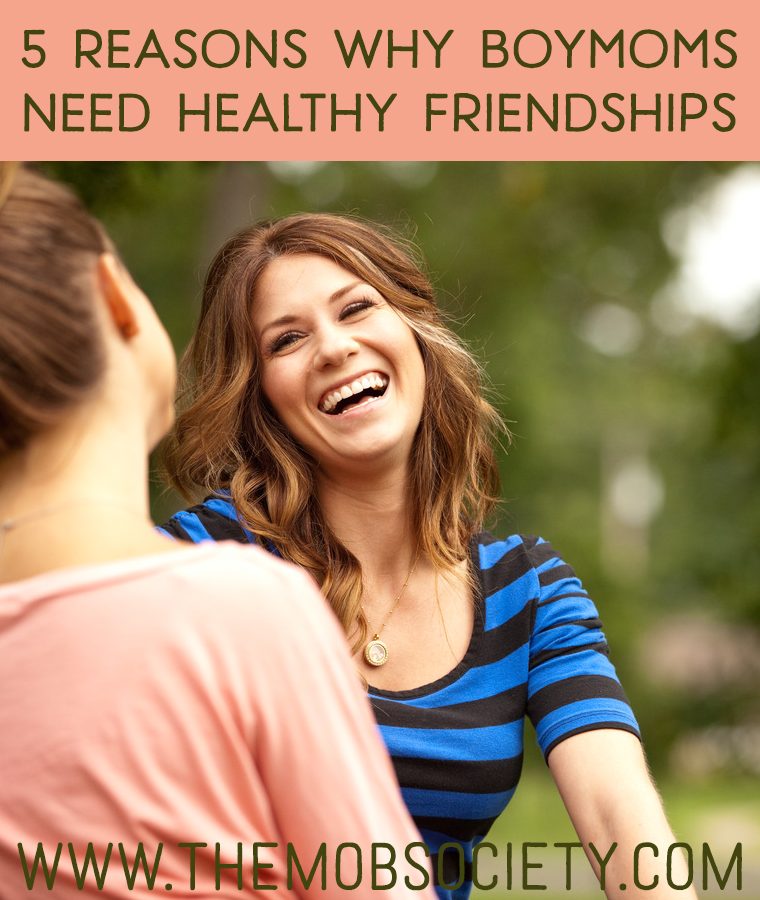 I opened the can of formula and looked around my house. Toys were strewn everywhere. Last night’s dinner dishes stared back at me from the sink and of course, my toddler was hungry. Three babies in four years had taken a toll, not to mention that we had moved to a new community just ten days before our second child was born. His brother would follow just a mere fifteen months later.

Ever since I was a little girl, I wanted to be a mom. I’m beyond thankful to be be entrusted with three little hearts to help mold and grow and I would choose to do so again and again. I won’t ever regret becoming a mother.

I didn’t expect motherhood to be easy, but I also didn’t know it would be this hard.

I was lonely. I missed my friends from home. And while I love my husband, I needed girlfriends. Girlfriends who would “get” me because we both were rowing the same boat.

It’s so easy to quickly discount our friendships when life gets hectic. We tend to shove our friendships aside when our work schedule gets too busy or the demands at home keep us from even getting a shower or when there’s a family crisis. It’s our authentic friendships, though, that will help us stand after we’ve fallen. Heart sisters pull us up even when we don’t know we’ve fallen.

And let me tell you, as the mother of two little boys (and a spunky daughter), I am so thankful to have friends who help me to know what’s normal and what isn’t. Friends who say “Me too,” or “You’ll get through it.”

Friends who “get” me.

So if you’re wondering why you even need to have friends, here are five good reasons, boy mama:

1. Friendships aren’t just good for your mental health – they’re good for your physical health, too.According to Harvard University’s popular Nurses’ Study, women who do not have a strong network of female relationships pose the same risk to their health as habitual smoking and being overweight. Those with strong friendships have lower cholesterol and lower resting heart rates, too. We don’t just want friends – we need them.

2. Our girlfriends help us know we aren’t alone. C. S. Lewis once said “Friendship is born at that moment when one person says to another ‘What?! You too? I thought I was the only one.” Isn’t it refreshing to know that other women have lived through toddler tantrums or the angst-filled teenage years? Doesn’t it make you exhale just a bit to know your marriage isn’t the only one that struggles now and then? Aren’t you thankful to know your child isn’t the only one who’s ever battled anxiety? When we know we aren’t alone, we see that we can do this.

3. Friends help us understand our boys. Whoever said it takes a village to raise our children is correct. I am so thankful for my heart sisters who have sons because I can ask them if it’s normal for my sons to not ever want to take a shower or for them to despise having to write a story for homework or should they really be this loud? Boy stereotypes? Maybe. But it’s truth in our house. And since I am not of the male species and I don’t have a brother, boy behavior sometimes baffles me.

5. We need to replace competition with camaraderie. It seems like our culture loves to glamorize catty behavior through television programs like “The Housewives of Wherever” and the reality show of the day. When we watch shows like this and read books and magazines with the same message, we start to subconsciously accept this kind of behavior and eventually, we expect this kind of behavior. If we truly want to change the culture of women, then we will need to replace competition with camaraderie. Don’t we want our boys to see women coming alongside one another instead of tearing each other apart?

I would love to share my new book, Heart Sisters: Be the Friend You Want to Have, with you. I’m giving away five copies to M.O.B. readers . . . Just tell us in the comment section why you need girlfriends and you’ll be registered to win. Winners will be announced in two days on our Facebook page!

Important Announcement About the Spring Edition of My Book of Prayer

It Starts With Me (Putting God First in Your Own Life)