Unwrapping the Gift – The Innkeeper

When I was asked to write about what our boys could learn from the infamous innkeeper who turned Joseph and Mary away, I was torn. Was he a good guy or a bad guy? Did he do all he could to help this very pregnant mother and her husband or did he simply tell them there was no room at the inn and get lost?
I decided I needed to research more about him so I started with the gospels of Luke and Matthew, the only two gospels that mention Jesus’ birth.

You know what I found? Nothing.

That’s right – nothing. Like the presence of the wise men at Jesus’ birth (it is believed that the wise men actually didn’t visit Jesus until he was a toddler), this detail has been fabricated by man.

“While they were there, the time came for the baby to be born, and she gave birth to her firstborn, a son. She wrapped him in cloths and placed him in a manger, because there was no guest room available for them.” – Luke 2:6-7 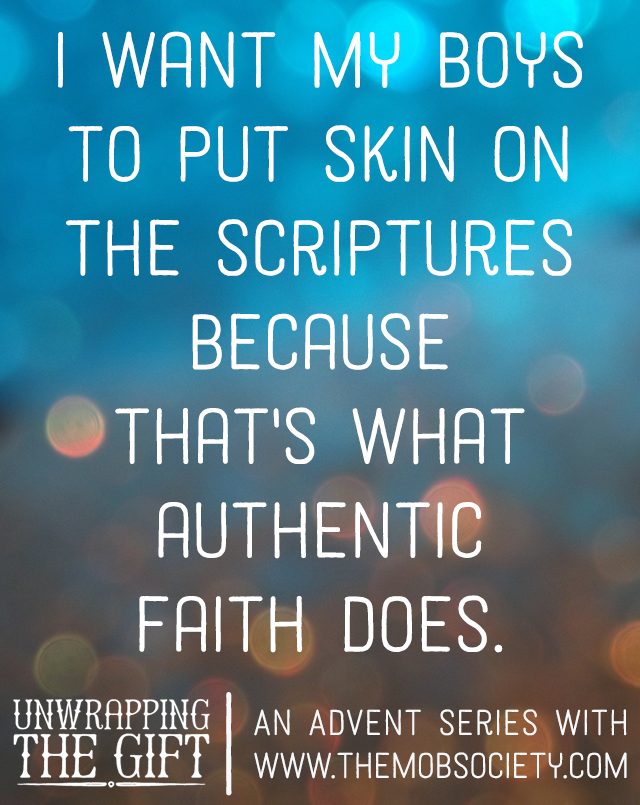 The Innkeeper: Villain or Good Samaritan? | An Advent Study via The MOB Society

The innkeeper is never mentioned in scripture – he’s the product of humanity’s imagination, perhaps fulfilling our desire to insert characters into a story to elevate the suspense of what would happen next.

But for today’s discussion, let’s just pretend an innkeeper actually existed. He was a good guy who meant well but . . . he didn’t do all he could do to diffuse a desperate situation.

It Begins With Listening

I want my boys to listen intently to a problem before deeming it impossible to solve. I want them to exhaust all possibilities before saying “no.”

They should exhaust all possibilities because I want them to truly care.

They should truly care because caring is loving your neighbor as yourself.

Loving their neighbors as themselves is how I know they are putting skin on scripture.

And I want my boys to put skin on the scriptures because that’s what authentic faith does.

Every room in the inn was full – there wasn’t much the innkeeper could do . . . or so it seems. He did at least offer the stable to Mary and Joseph and that’s better than nothing, right?

I do applaud him for at least trying to think of another solution that wouldn’t leave a laboring young woman out on the streets. However, I wonder why he didn’t ask one of the inn’s guests if they would sacrifice their room soMary and Joseph could rest comfortably and give birth in a cleaner and safer environment?

Sure, some might have been offended to have been asked to give up their room, but desperate times call for desperate measures and this was a desperate time. I don’t want my boys to fear offending someone or be imprisoned by what other people think – if someone desperately needs help, then nothing, I mean nothing, should stand in the way of what they’re willing to do to help that person.

The innkeeper meant well. He was probably a good guy. But even good guys make bad mistakes and are guilty of doing just enough to get by but not enough to really help the problem.

My sons, I want so much for you . . . But there’s nothing, NOTHING, I want more for you than to love your fellow man with a sacrificial love. A sacrificial love that doesn’t care what others think. A love that isn’t held in bondage by thick, heavy chains, that won’t just do the bare minimum but instead do the over-the-top maximum to help someone who desperately needs it.

I want you, my boys, to love others at a level that scares you – in a very good way.

“Do nothing out of selfish ambition or vain conceit. Rather, in humility value others above yourselves.” – Philippians 2:3

Dear Lord, convict my heart today to serve others sacrificially. I don’t want to just serve when it’s convenient or when I feel like it but rather serve to the point where I feel the love of You who lives in me pouring out to them. Give me the strength and energyto manage the other tasks I’ve been entrusted with and help me to exhaust all possibilities when someone else needs help. Amen.

Advent Options for the Busy Mom