I’ve already vowed I won’t do it this year.
I won’t expect Norman Rockwell’s paintings to spring to life in my living room while we’re decorating for the holidays.

I’ll try not to get irritated with so many little hands ruffling through the Christmas boxes and banish everyone to the play room.

I won’t collapse at the end of the day and promise myself it’s the last year I’ll ever decorate.

When I was a little girl, I dreamed of my future family –  a husband, a daughter and a son. We would do crafts and take long hikes,  never watch television and well . . . you know.

While it’s true we do some of the above things (well, OK, maybe not crafts), it’s also true those long hikes are often peppered with bickering brothers and a sister who has had enough. There are days we watch more television than we should because I just need a moment. Or two. Or three. And the few craft projects I’ve tried involved glitter and I’ve been emotionally scarred and might need counseling before I venture into that arena again.

Yet as I am now almost to my ninth year of motherhood, I think I might have uncovered the secret key to less stress during the holidays: 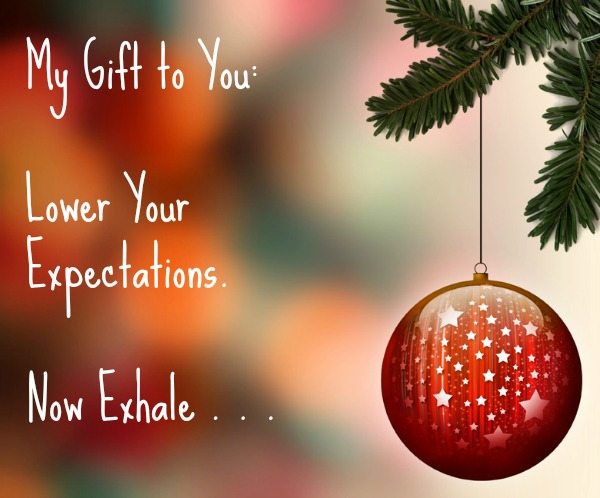 This doesn’t mean you’re going to show up at Grandma’s house and give her a gift in a shopping bag with the price-tags still on. I’m not suggesting we become apathetic or rude.

But I am suggesting we step back into reality and throw those expectations down a few notches.

Of course my children are going to open every box of decorations and flit from project to project because they’re kids and they’re excited.

Decorating for Christmas means Christmas is near and we all know how our little darlings kick into overdrive during the month of December.

If I expect this to happen, then I might be less apt to banish everyone to the playroom.

If I don’t banish everyone to the playroom, then maybe they’ll learn how to decorate systematically and not just one thing here, another there and I won’t vow to never decorate again at the end of the day.

Lowering expectations is not just for when we’re decorating our homes, either. If you don’t tend to be a crafty person, then don’t scour Pinterest for the perfect gift to create for your child’s teacher and kill yourself making it. There’s nothing wrong with gift cards or a nice hand-written note expressing your gratitude. As a former teacher, I can’t remember anything I ever bought with a gift card but I have a stash of letters written by students and their parents that mean the world to me.

If you despise baking, then don’t.

If you don’t have it in you to coordinate everyone for the family Christmas card photo, then let everyone pick their own outfit. No families wear matching outfits in real life anyway.

The thing about Norman Rockwell paintings is that they’re two dimensional. There’s no talking or moving or real-life in them.

And the thing about my living room is . . . there’s a whole lot of talking, moving and real-life going on.

Real-life is bumpy. It very rarely goes as we expect it to go. This isn’t intended to be a negative statement but rather an encouraging one: authentic living doesn’t coordinate with unrealistically high expectations.

So exhale, boy mama. Allow yourself to have fun this holiday season and focus on the big picture: the birth of a King just over 2,000 years ago.

His grace is enough.

Merry Christmas, Sweet Boy Mama’s. May you exhale and know He is there. Surviving the Terror of the Temper Tantrum

3 Simple Tips to Teach Boys to Take Responsibility to Pray

how to get Christmas into their hearts