I wanted Jesus to heal my uncle.
I sat across from my husband at our favorite local pizza dive with tears in my eyes and said, “I’m not ready for this.” I knew it was coming—could feel it in my bones and in my heart—a season of loss, stripping, laying bare, and eventual rebuilding. Somehow, I knew it was coming. Maybe that was the Lord’s grace, but it didn’t make it easier.

A stripping it was. 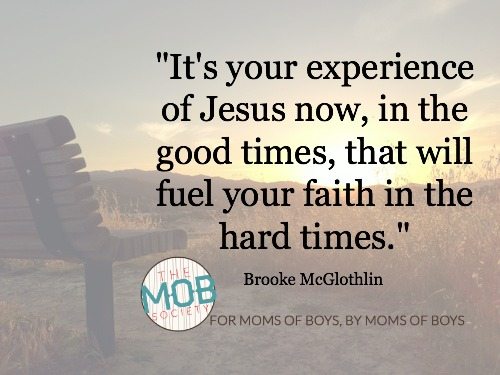 I watched my uncle fight and lose his battle with pulmonary fibrosis, his lungs hardening over time until he could barely breathe at all…and over the course of several years, I prayed and hoped Jesus would heal him.

It was my dad’s other brother who actually started the cycle, passing away on my youngest son’s first birthday. Ten months later, the one I’d thought would go first joined him. Then my grandfather, then my aunt, then my baby, then my grandmother. And I hoped Jesus would heal them all.

But he didn’t. Or at least not here. And that’s not what I hoped for. I wanted him to heal them here so I could enjoy more time with them. But that wasn’t his plan.

As moms, we’re convinced that we know what’s best for our kids…that our way really is the best way for them. We see their gifts, their talents, their possibility, and we sacrifice to help them reach the fullest them they can be. And then God doesn’t always heal when we need him to, leaving us wondering why it all matters, and if any of it is worth it.

But he does do what he set out to do. He accomplishes what he came for in his timing…and friends, today, I want to help us not lose sight of the significance of that gift.

When Jesus walked among us, he healed many sick. Crowds brought their lame, blind, bleeding, leprous, dying friends and family to the savior in hopes that just a mere touch of his garment would bring them peace. And it was peace Jesus came to give, but not just of the physical kind. Maybe not even primarily of the physical kind.

“Why do we seek him? Is it so he can perform for us, take care of all our needs, bind up our wounds, raise our dead? He is that God. He sees us. But if we only follow him because of what he does, there will come a time when we feel like he doesn’t. And then we must choose if we will turn away or follow through the times when life hurts too much because of who he is, not what he does.” ~ Hope for the Weary Mom

Friends, Jesus didn’t come to heal our bodies of sickness. Occasionally, just because he loves us so much and because it brings him the most glory, he heals our disease, but it’s not the main reason he came. He came to heal our souls.

Today, sweet mama, I want to ask you take a good, hard look at why you’re following Jesus. Is it because of all he’s done for you? Good, that’s wonderful, right, and true. But there’s more. When the tough times come, and they will, your ability to follow anyway will need to be based on something deeper, and that can only be found in who he is. Your love for him will need to sustain you even when you can’t see him at work in your life.

Thankfully, it’s your experience of Jesus now, in the good times, that will fuel your faith in the hard times (<—Tweet that!) So if you’re hanging out in the sweet times, with blue skies all around and not a drop of rain in sight, get in his word. Get to know him NOW, and commit to following him even when the going gets tough.

Would you like to join an intimate, exclusive group of like-minded boy moms who want to take the information they read on the MOB Society to the next level?

“The purpose in a man’s heart is like deep water, but a man of understanding will draw it out.” Proverbs 20:5 (ESV)

Everything we do at the MOB Society is designed to help you raise godly men. Our vision? To help moms find delight in the chaos of raising boys, and raise a generation of men to love the Lord.

As we’ve been praying and asking the Lord what we could do to come alongside you in a deeper way, the Lord put Proverbs 20:5 on our hearts, and gave us a idea to help you put your faith into action.

You are cordially invited to join our brand new private Facebook group for mothers of boys, Going Deeper with the MOB Society: Putting Faith into Action. Many members of our writing team, faces you know and recognize from our blog posts, are hanging out over there waiting to help you take the material they write about and put it into action.

If you’ve wondered how to take what you read on our blog to the next level, this group is for you. You’ll have access to the hearts and words of our writers, be able to talk to them on their writing days, and really hear their hearts for the words God puts on their hearts for you.

To join, just follow this link and send us a request. We’ll make sure you get in! When you get there, be sure to read the “about” section, and watch for today’s post inviting you to introduce yourself. We can’t wait to get to know you better! Brooke McGlothlin is the co-founder of the MOB Society, author of Praying for Boys: Asking God for the Things They Need Most, and co-author of Hope for the Weary Mom: Let God Meet You in Your Mess (releasing from Harvest House in February 2015).

A Discount Code from Farm Girl Paints! (you guys…these cuffs are amazing!)