They say memories fade. But I’m pretty sure this one memory is firmly etched in my mind.

I had just given birth to my second son. Like any mom of a toddler and newborn knows, the first year of two-kid tango is tough. Meeting multiple needs simultaneously is exhausting. To help give me a little breathing room my oldest son attended a little two-day school program.

I won’t soon forget the day I got that phone call.

The one where the school’s  program director told me if my son bit one more kid, he would be removed from school.

It’s never a mom’s goal to have her child kicked out of school. And most definitely not before he enters preschool. 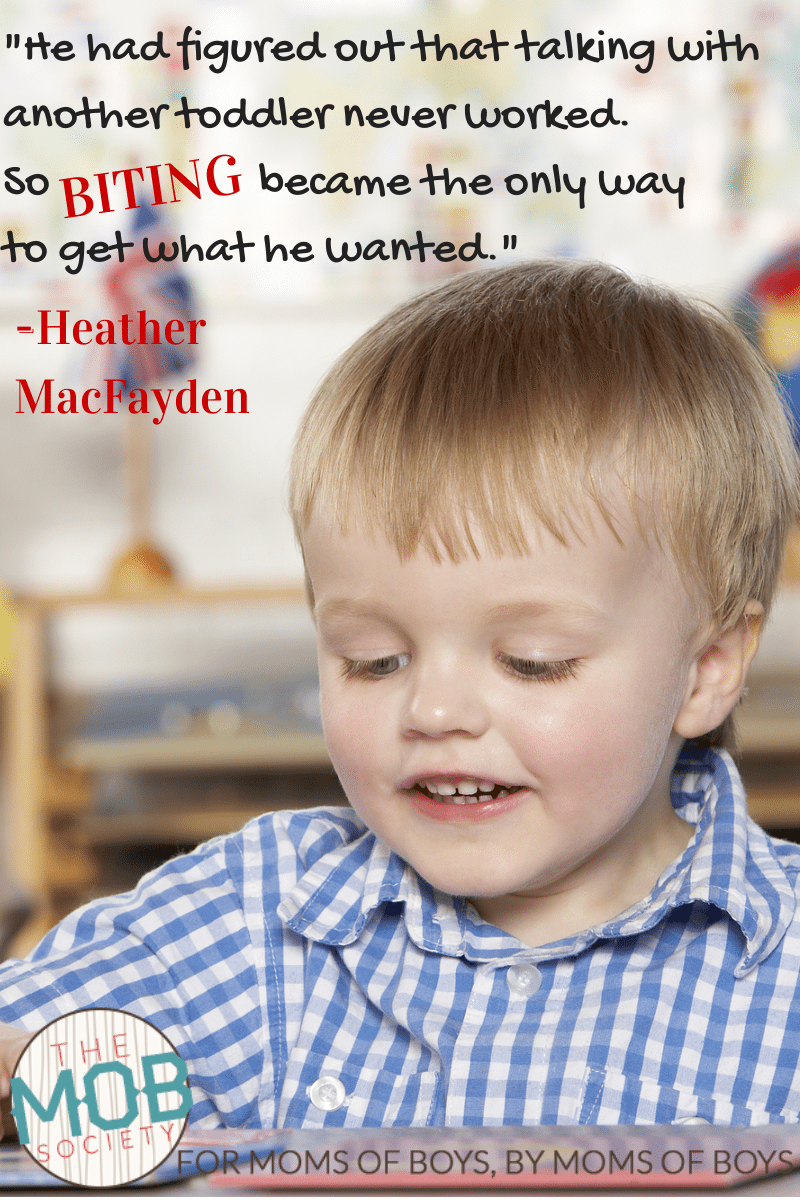 I get it. Biting is bad. “Biting hurts”.

But that first time my son bit another child? Let’s just say “utterly horrified” only scratches the surface of emotions I felt. More like a jumbled mess of: embarrassed, angry, sad, hopeless, and clueless of how to make him stop.

Did I mention I’m a trained Speech-Language Pathologist? Even more reason my child should “use his words” instead of his teeth to communicate.

The sweet teachers tried to make me feel better saying, “We understand, sometimes little ones get frustrated and don’t know how to share their feelings,” or “He just doesn’t know how to express himself, so he bites.”

Here’s the deal. That boy used sign language at 10 months and full-on sentences by the age of two. He knew how to talk about his feelings.

The truth? He had figured out talking with another toddler never worked. So, biting became the only way to get what he wanted.

Here are the steps I took to tackling the problem at hand:

1. Get advice from a mentor

I decided to talk to one of my mentors about ways to get him to change the behavior. She suggested giving him something else to replace the biting. Like stomp his feet. Or give himself a hug.

2. Talk to all the adults caring for him

I also brainstormed preventive ideas with his teachers. They noticed he didn’t bite if he used his pacifier. Worth a shot! I’ll take prolonged paci use over kicked out of school any day.

3. Do some intentional training at home

I bought a couple books so we could talk about why it’s not okay to bite other kids. Also did some role-playing, with sabotage. While playing with him at home I grabbed one of his toys. Then I modeled ways he could tell a friend he was upset. And worse case go tell a teacher when he got in a pickle.

You know what? Fortunately, he never bit in class again (praise the Lord!).

You know what, else? My next two boys also turned out to be biters. My third guy, bless him, enjoyed biting the most, banning him from our fitness center for four weeks.

The hardest part of that phone call was the shame. Feeling like a horrible mom because of his actions. Like somehow I’d been training him to bite other kids.

Our boys make their own choices. We do our best to train them, “Biting hurts” and “Bite your apple not your friends.” But when that “friend” is holding a shiny ball sometimes all the training goes out the window and the teeth come out.

That’s just not your fault, mom.

It’s childishness. It’s selfishness. It’s being put in a highly sensory stimulating environment with only 2 teachers for 12 kids.

You and I? We just need to keep up the training. Work with the teachers. Teach our sons to apologize well. (Buy our friends coffee when their children are bit.)

And most of all, give each other grace. If your child was the one bit, don’t blame his mom. I bet she is more horrified than you can even imagine. Give her a hug, ‘kay?

Has your son ever bit someone? How did you train him to stop?