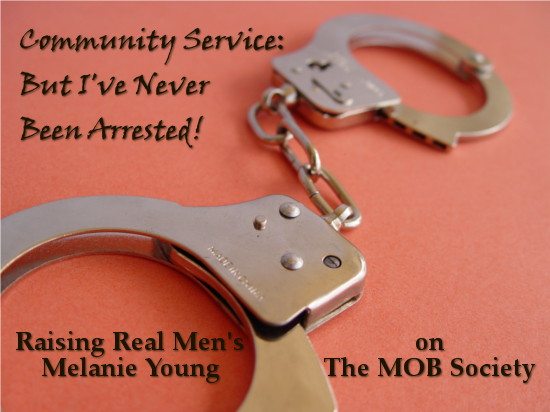 One of our sons was working on an college honor scholarship application one day when he said,“Uh, mom? I’m confused by this question. It asks me to write an essay about the community service I’ve done, but I’ve never been arrested!”

After I stopped laughing, I explained, “Community service isn’t just what you’re assigned to do when the judge doesn’t want to send you to jail! They are asking about the volunteer work you do. You know, like working the homeschool conference, helping out at the food bank, stuff like that, you know, things you do to help your neighbors.”

“But, what’s the big deal? Doesn’t everybody do that?”

Man. I was floored. I realized that he just assumed all decent people gave back to their community. It really was no big deal at all to him. It was as natural as sports, social media, and paying your bills. Cool.

So, how’d that happen?

Well, we’re passionate people. We have pretty strong opinions and we recognize that if things are going to change, we’d better be prepared to change them. Over the years, we’d worked in our church, volunteered with parenting ministries, worked on political campaigns, and served in homeschool support groups and finally the state organization. So what? Lots of folks do that whose kids don’t give a rip.

Here’s the key. We hated being apart from our children, so we wrapped them into whatever we were doing.

Mom and Dad speaking? Why don’t you set up the chairs and welcome people?

Going to a nonprofit board meeting? Hey, put on some nice slacks and come along. We’ll talk about it on the way home.

Political meeting? Grab your blazer, son. You’ll need to be quiet during the meeting, but there will be some neat people we’ll meet afterwards.

Bringing a meal to a family dealing with a hospitalization? What would you want us to bring if you were them? Do you want to make the dessert?

Unpleasant duty? What would Jesus do?

It takes a little extra work to rope your kids into your volunteer work. They have to know how to dress and how to behave, when to speak and when to be quiet, and what they can talk about to others. The payoff, though, is huge.

They learn to give. They learn to serve. They learn to do for others like they were doing it for Christ. They also don’t resent the time you spend since it’s time with them, too. Bonus: They gain a reputation in the community that opens doors later!

Including your children in your service teaches them to serve in the best way possible – discipleship! And they don’t have to be sentenced to it, either!

There are many charities I love, but few with more daily impact than the dedicated volunteers that protect, promote, and support homeschooling throughout the year: your own statewide homeschool organization.

When Hal was president of North Carolinians for Home Education, he routinely donated 20 hours a week after work. Doing what? Talking to legislators and reporters, developing relationships with other organizations, and counseling support group leaders.

One night, we got a call from the head of the Christian school association. Their lobbyist had discovered that the next morning, the budget committee would discuss a proposal to quietly slip the private and homeschools under public school authorities for the first time in 30 years! Hal called people into action, arranged folks to be at the committee meeting, and prepared an email alert. The next day, the alert went out asking homeschoolers to call and protest. Within 24 hours, the governor’s office was on the phone asking, “What do we have to do to make it stop?” Hal told them, they did, and we did. Crisis averted, and increased government interference with our families was held off.

If you homeschool, or are planning to, why don’t you join your state homeschool organization? Find yours here. http://www.hslda.org/orgs/Default.aspx

Melanie is the author, with her husband Hal, of the Christian Small Publishers Book of the Year, Raising Real Men, and the new My Beloved and My Friend: How to be Married to Your Best Friend Without Changing Spouses. They have six great sons and two sweet daughters. Join them at Facebook.com/raisingrealmen and Facebook.com/halandmelanie – and read their own blog atwww.RaisingRealMen.com

there once was a girl who was failing her boys…