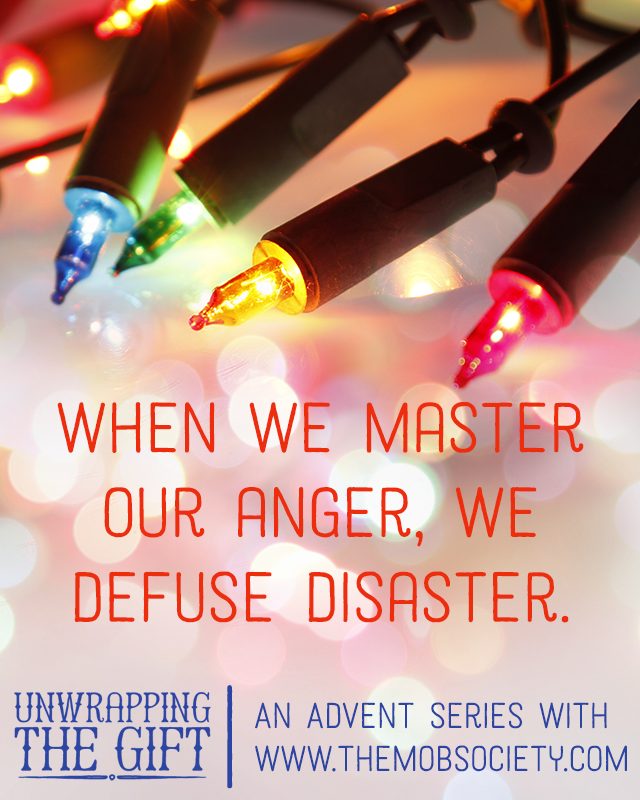 Unwrapping the Gift: Herod | An Advent Series with The MOB Society

In the Christmas account of Matthew 2:1-19, the clear villain is Herod. He was a brutal character the Romans installed as a puppet king, not even a Jew, but an Idumean from the south. When the Wise Men appeared in his courts asking, “Where is He who is born king of the Jews?” (Matthew 2:2), it’s no surprise that Herod was troubled. After all, he wasn’t born to his royal position, and someone who was might challenge his authority one day. Herod had murdered several family members to eliminate rivals for his throne, so One who had a claim by birth must be stopped!

Herod asked the Wise Men to report back when they found the Christ Child under the false pretense that he wanted to worship Christ as well. (Matthew 2:8). Herod lied. His aim was to locate the Infant and murder Him. God warned the Wise Men in a dream not to return to Herod, thwarting the king’s plan. In a fury, Herod sent soldiers to Bethlehem with orders to slaughter every boy under two years old.

How horrifying! Even now, two thousand years later, we are sickened by this massacre. How can we learn from the example of such a ruthless, despicable character?

I doubt Herod in his childhood was much different from any young boy. How on earth does any mother’s son turn out to be a mass murderer of children? He does it by giving way again and again to sin in his heart. Most of our boys go through a time in the preteen- or early teen years when their hormones go crazy and they are tempted by anger – a lot. It’s got to be one of the most frustrating times of all to be a parent. They get mad for no reason, hurling accusations at anyone nearby, and they’re spoiling for a fight. It’s awfully hard not to get mad right back at them.

We can’t give way to anger in response, though. Anger easily leads to bitterness, meanness, and cruelty. Our boys have to learn how to climb down off the walland deal with their temptation in a godly way–we all do. The Word tells us, “Whoever has no rule over his own spirit is like a city broken down, without walls.” (Proverbs 25:28)

When we master our anger, we defuse disaster.

A city without defenses reacts to the slightest threat because it can’t just shut the gates and ignore provocation. In the same way, when we let anger control us, we’re vulnerable to the attacks and temptations of our enemy. We react and retaliate when there’s no need—or justification—for it. We shouldn’t be that way and neither should our boys. Instead, we need to respond to anger with a soft answer (Proverbs 15:1). We need to listen carefully, consider our own words, and be slow to anger ourselves (James 1:19). When we master our own anger, we model self-control for our children, and they learn to trust us.

Father, please help me to control myself and to respond in a godly way to my children’s anger, so they can learn not to give way to anger, too. In Christ’s name, Amen.

Boot Camp 9-12 is a LIVE webinar series for parents of boys nine and up, to help you learn how to make the teen years great. In the very first session we talk about dealing with anger and moodiness common in this age. Join us! Melanie Young is, with her husband Hal, the author of Raising Real Men: Surviving, Teaching, and Appreciating Boys, Christian Small Publishers 2011 Book of the Year, and the soon-to-be-released (preorder now!) My Beloved and My Friend: How to be Married to Your Best Friend Without Changing Spouses. Join them on the web at their blog!

Merry Christmas from The MOB Society

Man Up: Pitch In