He groaned and heaved his weight against the steel blade held captive by the rock.  Once again mustering all his available strength the young boy furrowed his brow, braced his feet and strained upward.  The unforgiving stone somehow gave way and Arthur lifted Excalibur triumphantly over his head declaring to all that he was to be king. For as long as I can remember I’ve been fascinated with medieval lore and history.  The tale of King Arthur is one of my favorites and I’d be lying to say that my view of knights hasn’t influenced my dreams for my son.  When I think about my son, aside from loving Jesus and following him, I want my son to be chivalrous.  I know, I know, it’s quite an archaic word, but chivalry was the standard by which a good knight was measured.  A good knight was known for his courtesy, generosity, valor, and dexterity in his arms--translated for today, a good knight was kind, polite, brave, giving and had some ninja moves.  These are all attributes that I want to cultivate in my son’s life.  Er, well maybe not the ninja moves, but y’all get my drift.

How am I supposed to do that when he has four sisters?  That’s right.  I said four.  There is a lot of estrogen running rampant through my household and while most people hear of my son’s plight and say, “Poor boy,” I think he’s pretty lucky.  He has a wonderful opportunity to learn how to treat women and practice chivalry.  I’d love to hear how you encourage chivalry in your boys and I thought I’d start by sharing some of my ideas.

Courtesy:  We say please and thank you.   We hold doors open for others, whether they be male or female.  We’re working on table manners and, ahem, bodily function appropriateness…need I say more?  One day recently, my son was having a bit of a bad morning and he decided that he would act out by not holding the door for his sisters.  Instead, he would open the church doors just enough to slide his little body in and have it shut behind him.  He found himself practicing his door holding skills for the next twenty people or so that came to church.  Thankfully, those parishioners were kind enough to oblige me my little teaching moment and allow him to open the door and greet them.  We haven’t had an issue holding doors since.

Valor:  What exactly is valor?  Well, it’s bravery in the face of danger.  This one can be a little tricky because A) there’s not too many things that I feel comfortable pushing my son into at his age that are scary and B) I want to allow my son to say no when something makes him uncomfortable.  My son is only six so the idea of courage is something that I feel can cultivated by being an encourager.  I want my boy to know that I am in his corner, so when he feels unsure, he knows I am cheering for him.  Another time that valor can be practiced is at the hospital or doctor’s office.  More often than not, your boy, like mine will get scrapes, cuts, and (possibly not too serious) other injuries.  Commending them for their bravery and courage is important.  Maybe your son could be the spider or ant-killer around your house.  The point is, give them an opportunity to display bravery and then commend them for it. I also pray with my son, something along the lines of, “I know that Roman is scared right now, but please help him not to be afraid and instead to trust You.” Simple, but powerful.

Generosity:  Today’s culture is rampant with the mentality of GIVE.ME.MORE. and I feel like I spend a lot of time battling a materialistic point of view.  The best way to combat the desire to amass more stuff is to GIVE.  Whether it is giving at church, or purging toys, make and opportunity for your son to give and see the fruit of his gift.  With his sisters I try to encourage my son to give of his TIME by helping them accomplish a task.  Sometimes it works…sometimes not so much.

Dexterity in His Arms:  Ahem, as I said.  Ninja moves.

So there you have it, a few ways you can encourage chivalry in your sons even in this day in age when chivalry is almost extinct.  Feel free to leave your ideas for encouraging chivalry in the comments…I’d love to hear what’s worked for you and I’m sure the other MobSociety members would as well.

Prayer for the day:  Dear Jesus, please help my son to display the different characteristics of chivalry.  Show me ways that I can encourage and build generosity, valor, and courtesy into his life.  Let him be willing to go against the grain when it comes to chivalry.  Help him stand for what is right and true.  Amen.

Kristina is a single mom to four chatty girls and one son who tries to get a word in edgewise.  You can find her writing here at MobSociety as well as on her personal blog, KJTanner.com  When she’s not writing or working as a sign language interpreter you can find her baking up a storm in her kitchen or reading a book.  You can connect with her more on Twitter by following @kjtanner. 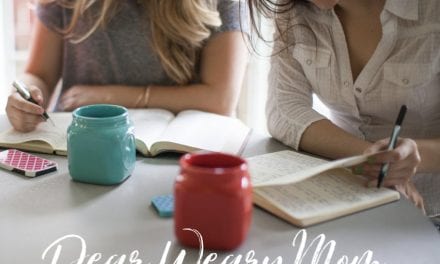 How to Trust God