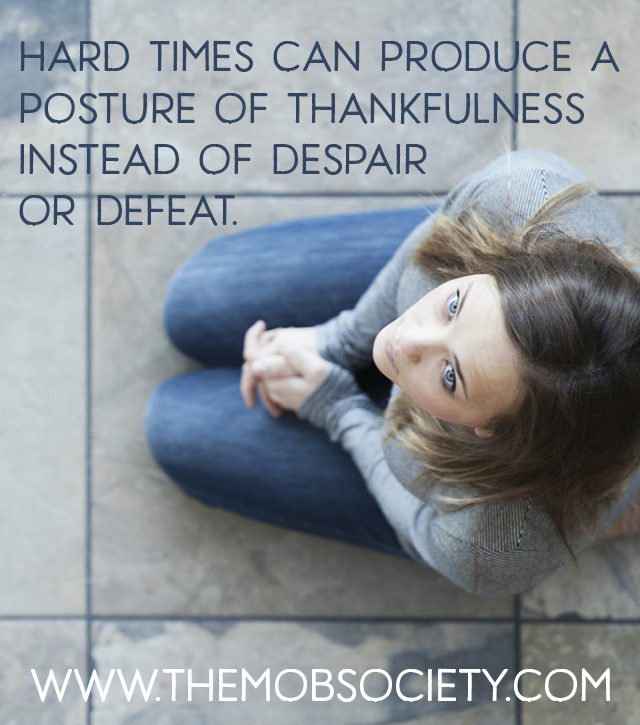 Teaching Boys to be Thankful in Prayer via The MOB Society

It has been a very difficult and trying season for my family.  Over the past few years we have walked through depression, death, divorce and financial struggles.  There were many times that I sat at the dining room table trying to figure out how to pay my bills when I had no money. There were numerous days when the cupboards were empty and I had 2 growing boys to feed. In all of those situations God was faithful and He provided.

The Bible tells us that when we choose to follow Jesus that we are choosing to walk a difficult path. This is something that my boys have a hard time understanding, but nonetheless is very important.  There will be times I have to tell my boys that they can’t read a book (or watch a movie) that all their other friends are watching.  There will be times when they are treated differently (and maybe harshly) because of their faith.  There are going to be times when life is unfair beyond our abilities to understand.

Lessons from the Lion’s Den

Whenever I think of an example from the bible of a young man that remained steady in his faith and thankful through his trials, Daniel comes to mind.  He is one of those figures in the bible that I am constantly holding out to my boys as a good example to follow when it comes to being a man of God.

One of our favorite stories of Daniel is when he is thrown into the lion’s den.  The thing that stands out the most to me is that even in the face of death, Daniel continued to pray and give thanks to the Lord:

When Daniel knew that the document had been signed, he went to his house where he had windows in his upper chamber open toward Jerusalem. He got down on his knees three times a day and prayed and gave thanks before his God, as he had done previously. Daniel 6:10 ESV

No matter what happened to Daniel, he never forget to give thanks to the Lord. He continued to pray, he stayed true to his faith and he served the Lord wholeheartedly. This is what I want for my boys.

What are some practical ways that we can help our boys be like Daniel and continue to pray thankful prayers even in hard situations? Here are a few things that I’ve been working with in my home:

What Brings Her Joy?

Man Up: Overcoming the Idol of Self