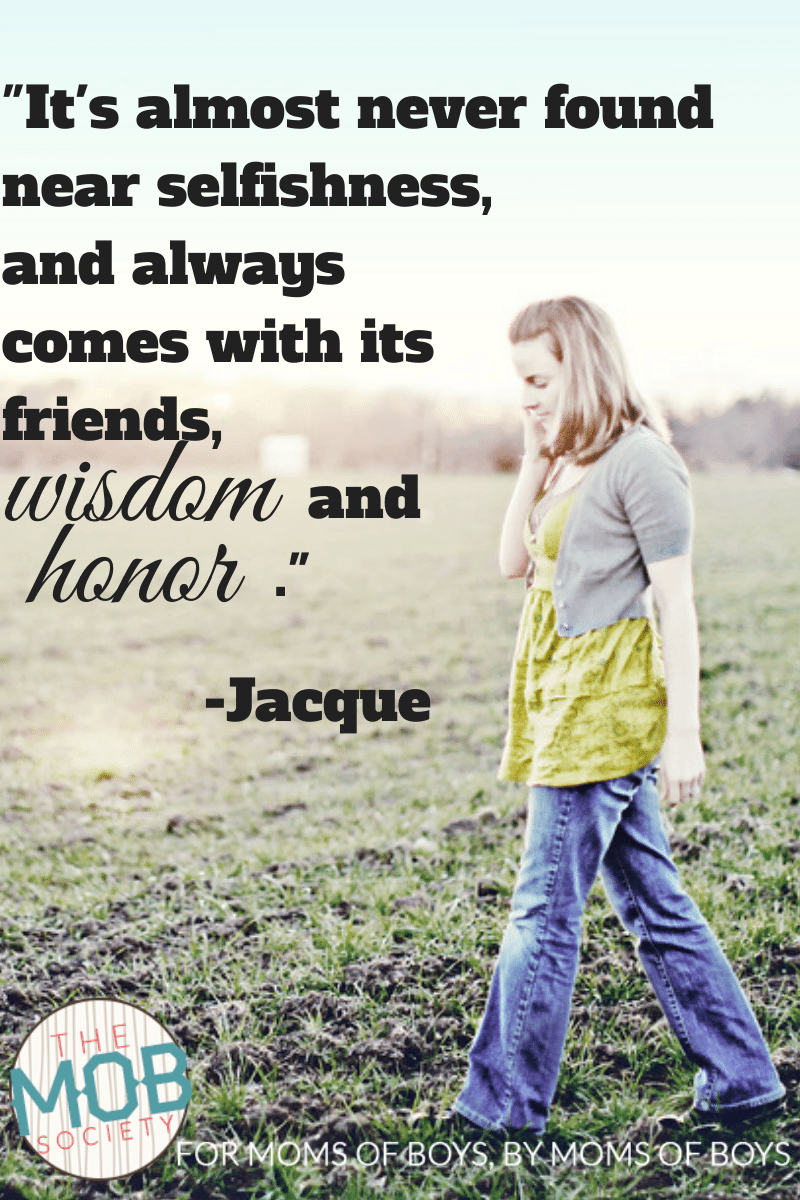 Dear son,
I sit by the window and stare at the bouquet on the table, daydreaming of the day you’re grown. A day that’s closer than I can possibly realize.

And on that day, you’ll stand tuxedo-clad at the end of an aisle with your hands clasped in front of you, waiting for the girl of your dreams to glide to you, carrying a beautiful bouquet of her own.

It seems too early to tell you all this, but I know when you finally need to know, you will not have heard it a minute too soon. So I’m going to just say it even if you don’t yet understand it because girls are tricky. When you’re just beginning to navigate your relationships with them, you need to know they’ll be much better at them than you and I don’t want you to be lost in the confusion.

There’s a process in discerning what to look for in a girl–this girl who’ll become your wife. And while this letter may be the first of many I’ll write, I wanted to begin with the most important thing.

I wanted to start with the trait you should look for first, before all the others because when you find it, you’ll likely find the others resting on it’s sturdy foundation.

It’s the opposite of pride.

It’s almost never found near selfishness, and always comes with its friends, wisdom and honor.

When pride comes, then comes disgrace, but with humility comes wisdom.
Wisdom’s instruction is to fear the Lord, and humility comes before honor.
Proverbs 11:2, 15:33 (NIV)

And so you ask, what exactly does humility actually look like?

Oh son, when you see it, you’ll know.

Humility is when you get into an argument and she’s willing to talk it through; when she listens without interrupting, and is open to the fact that she is wrong.

Humility is when she admits her fault, and says sorry without hesitation.

You’ll recognize humility when you make a wrong turn and you’re embarrassingly late to that event she’s been looking forward to so long.  Instead of berating you for her loss, she leans in with a grin, and tells you how everyone makes mistakes. Before long you’re laughing and stopping in for a milkshake you hadn’t planned to have, a new plan filled with grace.

Humility is when she’s not upset when you see her without makeup, when she’s not swayed by a name brand, and when she thanks you for how you provide.

You’ll see it when she insists on ordering the pizza toppings you want, even though she doesn’t prefer them.

It will be evidenced when she volunteers to see that action/thriller you’ve been dying to see, even though a romantic comedy is more her style.

Humility is when she looks out for others before herself, confidently reaching out to consider the needs,wants and hurts of others–actively pursuing them with a selfless compassion far beyond her years.

She’ll be the one willing to be served last, the one who volunteers to clean up first, and the one who looks you right in the eye when you’re talking, because she cares about your heart behind every word.

Humility may not be everything, but it’s the beginning of wisdom and honor… [Tweet that]

And as you sort through these things, know I’m here.

Waiting and watching and cheering as you find her.

The girl who’ll be yours through all the years.

Lord Jesus, thank you for the gift of our sons. Help us, as their mamas, to draw close to your heart. Remake us each day, to be more like you, that our sons would see and know by experience the kind of character to look for in a wife someday. Help us lay down our pride, surrender our selfishness, and extend humility in our everyday lives. And may wisdom and honor be ours as we model for them the kind of woman they need. In Jesus’ name we pray, Amen.

What does humility mean to you? How would you explain it to your son?

Working Mom Guilt (hope for the messiness of motherhood)