Last year I attended a few 1st grade boy birthday parties. During those parties I developed a strong opinion about boy interactions. So strong, in fact, I may have screamed corrections at other moms’ 7 year-old boys (not the correct approach, I know, but passion can make you do foolish things).

energetic but not mean

What I witnessed were boys purposefully hurting other boys. The response I observed by the adults around me was, “Let boys be boys.”  (Hmmm…so many thoughts about that statement.)

I agree that boys have a lot of energy (remember I have 4 of them running around my house).  My boys have oodles and oodles of energy. And as extroverts that energy only increases exponentially when we are out in public (like little excited puppies, my boys love to be amongst the people). 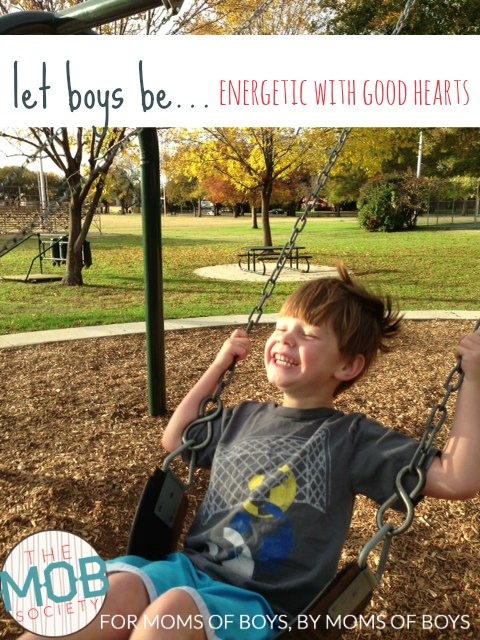 trained to honor others

I’ve spent a lot of time and energy training my boys to treat each other special. Over and over I repeat, “Do not return evil with evil” (when all else fails cling to what God said, right?).

Does that mean they aren’t still boys? Heck, no. They can wrestle and run and jump, but hurting someone else on purpose comes with a consequence in our home...time on the stairs to think, a moment in a bedroom to calm down, an apology, or devising a way to return the honor that was stolen through an act of meanness.

We spent time this summer with family visiting from England. I understand there are cultural differences between the states and the UK. For an American family, my husband and I have made intentional choices to be as counter-cultural as we can (limiting exposure to certain shows/movies; spending lots of time outside; not over-scheduling life)…but alas we are still American and have all-American boys.

So…ANYWAY, while we were with our extended family (not that they made me feel this way… but) in my mind I heard all those negative self-talks, like: “I’m doing a bad job as a mom because my boys don’t use cutlery” or “we have horrible children who purposefully hurt others”.

At first, I was embarrassed my four-year-old kept knocking over his sweet British cousin. Then I switched to defensive Mama bear mode claiming: “He is a four-year-old boy” and “Like all boys he has impulse control issues” and “Even with discipline he is going to make bad choices” and “I can’t control every move my boys make”.

On the one hand, I want to raise the bar that boys don’t have to be mean to be boys. They can be wild and free and high energy, but kind and thoughtful and respectful. On the other hand, I want my guys to be given a little grace that they may make mistakes and they are still in the training process.

Could there be a standard of honorable boy behavior and yet freedom for those boys in the learning process?

free to learn from mistakes

Perhaps the fault lies in my response to other people’s sons. Am I coming down too hard on other boys (like mine) who are in training or am I using the opportunity to teach them how to “love their neighbor”?

Instead of yelling, I could gather those three boys who were fighting and point out if they have claimed Jesus as their Savior then these friends are brothers in Christ. They should honor one another in how they play, never causing a “brother” to feel shame or hurt.

This holiday season I’m sure you will be around family and friends who, in responding to your boys’ energy, unintentionally make you feel defensive and insecure about your parenting.

Be encouraged you aren’t just letting your “boys be boys”, you are training them to honor one another. In this time of training, they are still “in process”, so stand tall mommy continue guide them. Give them values, morality, and spirituality. Let them be the boys God made them to be in this journey to the men who will honor Him.

Do you struggle with this tension between training your son to act honorably and also allowing him to be the energetic boy God made him to be?

“Without much help, boys grow physically–they get bigger, taller, and older.  Through their interactions with the surrounding world, they grow mentally and socially…Yet all this can occur without the boy ever making it through the wilderness to become an authentic man.  If his heart is not addressed, he is left to wander the wasteland of his own self-absorption and immaturity, incapable of entering the promised land of true masculinity.  Boys need to be vaccinated with values, mentored in morality, and steered in their spirituality.” {David Thomas from Wild Things: the art of nurturing boys}

Remember to go enter this week’s Praying for Boys Giveaway Days and join the new 5-day challenge, Covering them From Head to Toe! Want to be a part of Brooke McGlothlin’s launch team for Praying for Boys? Apply here!